We are a female ensemble, specialising in both the contemporary and the Barbershop style of 4 part harmony singing. We are proud to be associated with the world's largest singing organisation for women - SWEET ADELINES INTERNATIONAL.If you are a woman living in or near Queensland's Gold Coast who loves to sing and is looking for a quality group, or if you are an event organiser needing quality entertainment, you have come to the right place!  Check out our promotional clip.  https://www.youtube.com/watch?v=kA3hsHfMrfY

If you’ve ever thought about joining a friendly and fantastic female singing chorus then why not come along to our next New Members' Night to find out what it's all about.

You'll meet like-minded women who have a love of singing and harmonies while having fun at the same time.

If you're interested in finding out what we're all about. Please send us a message.

We’re excited to announce our latest live show, Lost on Broadway Coming to Nerang Bicentennial Centre on August 14th featuring a headline performance by Klacey. We have two show times on the day so would love to see you all there!

It's a typical day of rehearsal in a small theatre off Broadway. That is until the cast and crew discover the Star of the Show is missing.

Could something sinister have happened to her?

A classic whodunnit with a twist, Lost on Broadway is a suspenseful musical comedy featuring a selection of your favourite Broadway musical hits.

Come join in the fun and laughter as we unfold the mystery. 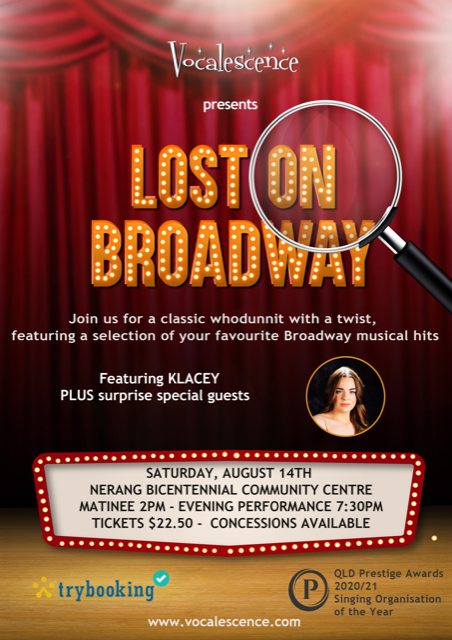 Have a listen to Vocalescence's recordings

Check out our great range of merchandise

Want to join our performance chorus?

Want Vocalescence to sing at your next function?

Why not hire Vocalescence to entertain at your next event? We can perform at corporate functions, charity events, community Entertainment events, birthday parties, christmas parties, awards nights, weddings, engagements, anniversaries, engagements, and even funerals and memorial services.